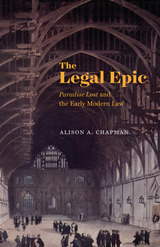 The seventeenth century saw some of the most important jurisprudential changes in England’s history, yet the period has been largely overlooked in the rich field of literature and law. Helping to fill this gap, The Legal Epic is the first book to situate the great poet and polemicist John Milton at the center of late seventeenth-century legal history.

Alison A. Chapman argues that Milton’s Paradise Lost sits at the apex of the early modern period’s long fascination with law and judicial processes. Milton’s world saw law and religion as linked disciplines and thought therefore that in different ways, both law and religion should reflect the will of God. Throughout Paradise Lost, Milton invites his readers to judge actions using not only reason and conscience but also core principles of early modern jurisprudence. Law thus informs Milton’s attempt to “justify the ways of God to men” and points readers toward the types of legal justice that should prevail on earth.

Adding to the growing interest in the cultural history of law, The Legal Epic shows that England’s preeminent epic poem is also a sustained reflection on the role law plays in human society.
AUTHOR BIOGRAPHY
Alison A. Chapman is professor of English at the University of Alabama at Birmingham. She is the author of Patrons and Patron Saints in Early Modern English Literature.
REVIEWS
“This is a terrific piece of scholarship. Chapman makes a very strong case for Milton's intimate familiarity with English and Continental law; his commitment to a natural law position that insisted upon the fundamental connection among human law, right reason, and divine law; and the relevance of legal concepts to Paradise Lost. The Legal Epic will fundamentally change how we read Milton's poem.”
— Debora K. Shuger, University of California, Los Angeles

“Chapman’s excellent study of Paradise Lost as a ‘legal epic’ raises the bar. She defamiliarizes the poem by demonstrating just how much it is interpenetrated by Milton’s self-confident and precise understanding of daily legal practice. Urging us to remember that he was the son of a scrivener and the brother of a judge, her book reveals a Milton whose profound sense of contingency and God’s grace never obscures his imaginative engagement with the intricacies of the law.”
— Paul Stevens, University of Toronto

“More deeply than any other study, The Legal Epic illuminates the ways Milton creatively employs and transforms the language and principles of early modern law in Paradise Lost.  Chapman persuasively shows that understanding Milton’s use of legal language and concepts in relation to theology is crucial to understanding his poetic theodicy.  This interdisciplinary book is a major contribution to Milton studies and to the study of early modern literature and law.  An outstanding achievement.”
— David Loewenstein, Penn State–University Park

"Chapman's careful attention to the nuances of Milton's precise legal terminology sheds new light on every part of Paradise Lost, including such much-studied subjects such Satan's fall and damnation, the nature of God, and the relationship of Adam and Eve before and after the Fall. The book is exceptional in its clarity of organization, writing, and accessibility....Essential."
— Choice

"The Legal Epic, aside from being a rare study of the variegated manifestations of law found in Paradise Lost, is a solid contribution to political philosophy. Chapman’s book is also a reminder that contemporary instances of separation between law (lex) and justice (jus) have deleterious political effects beyond unnuanced readings of Milton’s best-known work."
— The British Society for Literature and Science

“One of the most pellucid books I read for this review, The Legal Epic persuasively shows how the era’s legal discourses, practices, and associated ideas permeate Milton’s theodicy in Paradise Lost. . . . Chapman’s argument mounts a powerful case.”
— Recent Studies in the English Renaissance

"The almost encyclopedic breadth of her study and the clarity of her prose leaves the reader with a vision of an early modern legal world that was complex, contested, and often completely alien from our own....The fact that Chapman’s work leaves me asking for more is a sign of its suggestive power and broad applicability: she not only educates us about the particularities of early modern law but offers a clear and comprehensive account of the governing legal principles of the period that has the power to illuminate a vast body of texts beyond Milton’s legal epic."
— Modern Philology

"Alison A. Chapman’s, The Legal Epic: Paradise Lost and the Early Modern Law provides a fascinating and much-needed insight into Milton’s knowledge of legal concepts and precise use of legal terms in his great epic. Chapman’s nine chapters (including an introduction and conclusion) reveal how careful attention to the early modern understanding of legal matters elucidatesParadise Lostand provides a new perspective on perennial interpretative problems."
— University of Wales Press

"Chapman is to be applauded and admired for giving Milton’s readers an indispensable new context for reading Milton’s Paradise Lost. As with the best scholarship, the book will send readers back to the text with heightened admiration and increased comprehension. This lucid, gracefully written, and compelling book is indispensable reading for anyone who wants to grasp the achievement of Milton’s epic."
— Stephen M. Fallon, Papers on Language & Literature

1. Introduction
2. Law and Religion in Milton’s World
3. The Traitors of Heaven and Earth
4. The Arch-Felon
5. The Sole Propriety of Adam and Eve
6. Acts of Possession
7. The Mortal Sentence
8. Begging Pardon
9. Conclusion