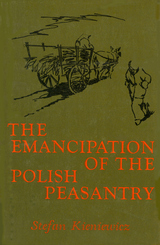 Captured in this study are the complexity and fascination of one hundred and fifty years of Polish political, cultural, and socioeconmic history. The author traces the course of peasant emancipation in Poland from its beginnings during the Enlightenment to its aftermath in the cultural awakening of the peasantry during the half century prior to World War I and shows how the peasant question played a vital role in the struggle for independence in partitioned Poland.

The book synthesizes, for the first time in any language, the work of leading Polish historians during the present century. It presents a clear analysis of the disintegration of  the economic system based on serfdom and compulsory labor prevalent in feudal Poland and traces the emergence of modern capitalist conditions, including wage labor and independent property rights.

Also analyzed is the role of foreign goverments in the emacipation process. The freeing of the serfs took place during a period when all or most of the country was under the rule of Russia, Prussia, or Austria. Although emancipation was due primarily to economic forces withing Poland, it was hastened by peasant resistance and the national struggle for political independence led by Polish patriots who demanded far-reaching social reforms.

This comprehensive study provides valuable information not only to those with a particular interest in Poland but also to scholars concerned with the parallel problems in Russia andother Eastern Eurpean countries, to specialists in agrarian history, and to students of Eastern European history who lack adequate reading materials in English.

TABLE OF CONTENTS
Contents
Foreword
Preface
Introduction
The Rent Reforms
The Peasants' Rights to the Soil
The Political Programs
2. The First Years of Foreign Rule
Changes in Russia
The Prussian System
The Josephinist Reforms
Gorzkowski and Kosciuszko
3. The Duchy of Warsaw
The December Decree
The Agrarian Structure in 1810
4. The Prussian Emancipation
The Regulation Reform
Consequences of the Reform
5. The Congress Kingdom, 1815-1830
6. The November Insurrection
7. Progress of Agriculture in the First Half of the Nineteenth Century
Wool and Alcohol
The Three-Field System
Private Regulations and Evictions
Programs in Emigration
Conspiracy in the Countryside
9. The Peasant Rising of 1846 in Galicia
Insurrection in Poznania
Awakening in Upper Silesia
Emancipation in Galicia
11. The Crisis of the Feudal System in Congress Poland
12. The Insurrection of 1863
13. The Russian Reform in Congress Poland
14. The Congress Poland Peasantry after Emancipation
The Progress of Farming
The Struggle for Land with Germanism
Pauperization of the Countryside
Emigration and Parceling
The Populist Movement
Economic Progress and Parceling
The Revolution of 1905-1907
18. World War I and the Problem of Poland's Independence
A. Constitution of 3 May 1791, Article 4
B. Decree of Frederick Augustus, King of Saxony, Duke of Warsaw, 21 December 1807
C. Edict of Frederick William III, King of Prussia, 14 September 1811
D. Enactment of Viceroy Joseph Zajqczek, 30 May 1818
E. Manifesto of the National Government of the Republic of Poland, Krakow, 22 February 1846
F. Imperial Patent of Ferdinand I, 17 April 1848
G. Ukase of Emperor Nicolaus I, 7 June 1846
H. Decrees of 22 January 1863
I. Ukase of Emperor Alexander II, 2 March 1864
Primary Sources
Secondary Sources
Index
REQUEST ACCESSIBLE FILE