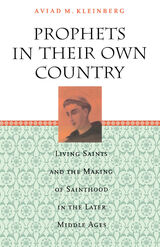 In this original study of the making of saintly reputations, Aviad M. Kleinberg shows how sainthood, though frequently seen as a personal trait, is actually the product of negotiations between particular individuals and their communities. Employing the methods of history, anthropology, and textual criticism, Kleinberg examines the mechanics of sainthood in daily interactions between putative saints and their audiences. This book will interest historians, anthropologists, sociologists, medievalists, and those interested in the study of religion.

"[An] important new book. . . . [And] an excellent piece of scholarship." —Diane L. Mockridge, Method & Theory in the Study of Religion

"[Kleinberg's] style is clear and accessible and his observations insightful; the book is a pleasure to read." —Veronica Lawrence, Theological Book Review

"Kleinberg's concern is not just with perceptions of sanctity, but, refreshingly, with what actually happened: and he is especially good on the conflict of the two. . . . [This] is not just a book but a way of thought, and one that promises interesting conversations at all levels from the church porch to the tutorial and the academic conference." —Helen Cooper, Times Literary Supplement


Preface
I: Saints and Saintly Situations
II: Negotiating Sainthood
III: Wide-Eyed Witnesses and Partial Observers
IV: The Passion of Christina of Stommeln
V: The Making of Lukardis and the Dissolution of Douceline
VI: St. Francis of Assisi and the Burden of Example
VII: The Blind See and the Lame Walk
VIII: Epilogue
Abbreviations
Select Bibliography
Index