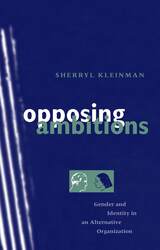 "Renewal" is a holistic health center run by baby boomers whose political ideals were shaped by the counterculture movements of the 1960s. Through interviews and observation, Sherryl Kleinman takes us inside Renewal and shows us how its members struggled to maintain a view of themselves as progressive and alternative even as they sought conventional legitimacy.

In Opposing Ambitions we meet the members of Renewal as individuals; learn about the differences in power, prestige, and respect they are accorded; why they talked endlessly about money; and how they related to each other. Kleinman shows how members' attempts to see themselves as unconventional, but also as serious operators of a legitimate health care organization, led them to act in ways that undermined their egalitarian goals. She draws out the lessons Renewal offers for understanding the problems women face in organizations, the failure of social movements to live up to their ideals, and how it is possible for progressives to avoid reproducing the inequalities they claim to oppose.
TABLE OF CONTENTS