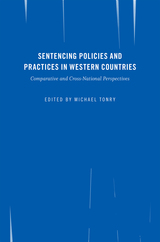 Sentencing Policies and Practices in Western Countries: Comparative and Cross-national Perspectives is the forty-fifth addition to the Crime and Justice series. Contributors include Thomas Weigend on criminal sentencing in Germany since 2000; Julian V. Roberts and Andrew Ashworth on the evolution of sentencing policy and practice in England and Wales from 2003 to 2015; Jacqueline Hodgson and Laurène Soubise on understanding the sentencing process in France; Anthony N. Doob and Cheryl Marie Webster on Canadian sentencing policy in the twenty-first century; Arie Freiberg on Australian sentencing policies and practices; Krzysztof Krajewski on sentencing in Poland; Alessandro Corda on Italian policies; Michael Tonry on American sentencing; and Tapio Lappi-Seppälä on penal policy and sentencing in the Nordic countries.
AUTHOR BIOGRAPHY
Michael Tonry is director of the Institute on Crime and Public Policy and the McKnight Presidential Chair in Law and Public Policy at the University of Minnesota. He is a senior fellow at the Netherlands Institute for the Study of Crime and Law Enforcement.