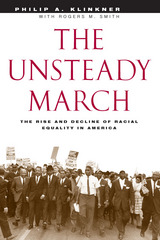 American life is filled with talk of progress and equality, especially when the issue is that of race. But has the history of race in America really been the continuous march toward equality we'd like to imagine it has? This sweeping history of race in America argues quite the opposite: that progress toward equality has been sporadic, isolated, and surrounded by long periods of stagnation and retrenchment.

"[An] unflinching portrait of the leviathan of American race relations. . . . This important book should be read by all who aspire to create a more perfect union."—Publishers Weekly, starred review

"Could it be that our unswerving belief in the power of our core values to produce racial equality is nothing but a comforting myth? That is the main argument put forth by Philip Klinkner and Rogers Smith . . . The Unsteady March is disturbing because it calls into question our cherished national belief and does so convincingly. . . . [It] is beautifully written, and the social history it provides is illuminating and penetrating."—Aldon Morris, American Journal of Sociology

Winner of the Horace Mann Bond Award of the W.E.B. Du Bois Institute for Afro-American Research at Harvard University.
AUTHOR BIOGRAPHY
Philip A. Klinkner is an associate professor of government at Hamilton College.

Rogers M. Smith is the Christopher H. Browne Distinguished Professor of Political Science at the University of Pennsylvania.
TABLE OF CONTENTS