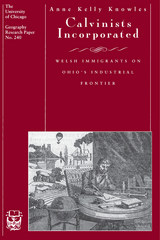 Calvinists Incorporated: Welsh Immigrants on Ohio's Industrial Frontier
by Anne Kelly Knowles
University of Chicago Press, 1996
Paper: 978-0-226-44853-4
Bringing immigrants onstage as central players in the drama of rural
capitalist transformation, Anne Kelly Knowles traces a community of
Welsh immigrants to Jackson and Gallia counties in southern Ohio. After
reconstructing the gradual process of community-building, Knowles
focuses on the pivotal moment when the immigrants became involved with
the industrialization of their new region as workers and investors in
Welsh-owned charcoal iron companies. Setting the southern Ohio Welsh in
the context of Welsh immigration as a whole from 1795 to 1850, Knowles
explores how these strict Calvinists responded to the moral dilemmas
posed by leaving their native land and experiencing economic success in
the United States.

Knowles draws on a wide variety of sources, including obituaries and
community histories, to reconstruct the personal histories of over 1,700
immigrants. The resulting account will find appreciative readers not
only among historical geographers, but also among American economic
historians and historians of religion.

AUTHOR BIOGRAPHY
Anne Kelly Knowles is lecturer in geography at the Institute of Earth Studies, University of Wales, Aberystwyth, and is a member of the editorial advisory board for Historical Geography.
TABLE OF CONTENTS