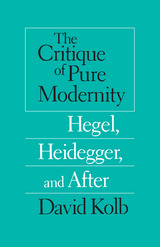 "Modernity" is a troubling concept, not only for scholars but for the general public, for it seems to represent a choice between oppressive traditions and empty, rootless freedom. Seeking a broader understanding of modernity, Kolb first considers the views of Weber and then discusses in detail the pivotal writings of Hegel and Heidegger. He uses the novel strategy of presenting Heidegger's critique of Hegel and then suggesting the critique of Heidegger that Hegel might have made.

Kolb offers his own views, proposing the possibility of a meaningful life that is free but still rooted in shared contexts. He concludes with comments on "postmodernity" as discussed by Lyotard and others, arguing persuasively against the presupposition of a unified Modern or Postmodern Age.
AUTHOR BIOGRAPHY
David Kolb is the Charles A. Dana Professor of Philosophy at Bates College and the author of Postmodern Sophistications: Philosophy, Architecture, and Tradition, also published by the University of Chicago Press.
TABLE OF CONTENTS


Preface
1. The Modern World
Traditional versus Modern Identity
Descriptions of Modernity
Max Weber
Formal Rationality
Other Signs of Modernity
2. Hegel's Criticisms of Civil Society
Civil Society
Mutual Recognition
Freedom and the Novelty of Civil Society
Critique of Civil Society
3. Hegel's Logic and Its Movements
The Need for the Logic
What the Logic Is Doing
What the Logic Is Not Doing
Involuted Movements
Mediation and Positing
A Sample Movement: Form and Content
Hegel's Pattern of Argument
More Involutions
4. Categories for Modernity
Categories for Modernity
The Concept: Universal, Particular, Individual
From Immediate Universality to Formal Universality
Moving Beyond the Categories of Civil Society
Objective Content
Overcoming Modern Formalism
5. Applying Hegel's Logic
Hegel and Finitude
Success in the Logical Enterprise
How Is Hegel's Logic to Be "Applied"?
Is Hegel Really Doing A Priori Philosophy?
Transcendental Philosophy and Reality
6. Civil Society and State
Objective Content and Freedom
Freedom and Custom
The Syllogisms of the State
The Self-Transcendence of Civil Society
The Success of the Hegelian State
7. Heidegger and the Modern World
The Homeless World
Heidegger's Characterizations of Modernity
The Modern Encounter with Things
Varying Understandings of the Being of Things
Preconceptual Understandings
The Space for Understanding
Modernity and Subjectivity
Modernity and Technology
8. Putting Modernity in Its Place
The Privileged Position of the Modern Age
Avowal and Overcoming
Appropriation
The Open Space
Mutual Need
The Silence of the Propriative Event
The Finitude of the Propriative Event
The Priority of the Propriative Event
Heidegger as a Transcendental Thinker
9. Life in the Modern World
Thinking
Preparing for a Far Future
The Fourfold
Political and Social Consequences
10. Hegel versus Heidegger
Similarities and Differences
Crucial Issues
Heidegger's Criticisms of Hegel
Hegel's Criticisms of Heidegger
Relations Between the West and the East
11. Further Explorations
Deep Conditions and History
Dialectic and Phenomenology
Thinking Multiplicity
The Unity of the Self
Multiple Methods
Form and Content Yet Again
Minding the Difference
12. The Modern World Revisited
Modernity and Postmodernity
Modernity and Tradition
Rethinking the Modern World
Living in Our World
Notes
Bibliography
Works of Hegel Cited in the Text
Works of Heidegger Cited in the Text
General Bibliography
Index