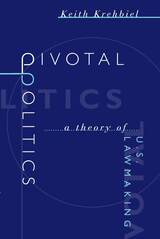 Politicians and pundits alike have complained that the divided governments of the last decades have led to legislative gridlock. Not so, argues Keith Krehbiel, who advances the provocative theory that divided government actually has little effect on legislative productivity. Gridlock is in fact the order of the day, occurring even when the same party controls the legislative and executive branches. Meticulously researched and anchored to real politics, Krehbiel argues that the pivotal vote on a piece of legislation is not the one that gives a bill a simple majority, but the vote that allows its supporters to override a possible presidential veto or to put a halt to a filibuster. This theory of pivots also explains why, when bills are passed, winning coalitions usually are bipartisan and supermajority sized. Offering an incisive account of when gridlock is overcome and showing that political parties are less important in legislative-executive politics than previously thought, Pivotal Politics remakes our understanding of American lawmaking.
TABLE OF CONTENTS