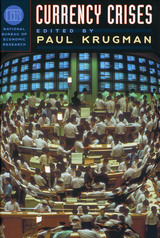 There is no universally accepted definition of a currency crisis, but most would agree that they all involve one key element: investors fleeing a currency en masse out of fear that it might be devalued, in turn fueling the very devaluation they anticipated. Although such crises—the Latin American debt crisis of the 1980s, the speculations on European currencies in the early 1990s, and the ensuing Mexican, South American, and Asian crises—have played a central role in world affairs and continue to occur at an alarming rate, many questions about their causes and effects remain to be answered. In this wide-ranging volume, some of the best minds in economics focus on the historical and theoretical aspects of currency crises to investigate three fundamental issues: What drives currency crises? How should government behavior be modeled? And what are the actual consequences to the real economy?

Reflecting the latest thinking on the subject, this offering from the NBER will serve as a useful basis for further debate on the theory and practice of speculative attacks, as well as a valuable resource as new crises loom.
AUTHOR BIOGRAPHY
Paul Krugman is the Ford International Professor of Economics at the Massachusetts Institute of Technology and a research associate of the National Bureau of Economic Research. He won the 2008 Nobel Memorial Prize in Economic Sciences.
TABLE OF CONTENTS

5. Is Launching the Euro Unstable in the Endgame?
Robert P. Flood and Peter M. Garber
Comment: Peter B. Kenen

6. The Mexican Peso in the Aftermath of the 1994 Currency Crisis
Sebastian Edwards and Miguel A. Savastano
Comment: J. Bradford De Long

7. The Aftermath of the 1992 ERM Breakup: Was There a Macroeconomic Free Lunch?
Robert J. Gordon
Comment: Paul Krugman

9. Panel Presentation: The Asian Model, the Miracle, the Crisis, and the Fund
Jeffrey A. Frankel