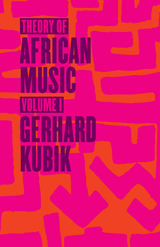 Taken together, these comprehensive volumes offer an authoritative account of the music of Africa. One of the most prominent experts on the subject, Gerhard Kubik draws on his extensive travels and three decades of study in many parts of the continent to compare and contrast a wealth of musical traditions from a range of cultures.

In the first volume, Kubik describes and examines xylophone playing in southern Uganda and harp music from the Central African Republic; compares multi-part singing from across the continent; and explores movement and sound in eastern Angola. And in the second volume, he turns to the cognitive study of African rhythm, Yoruba chantefables, the musical Kachamba family of Malaŵi, and African conceptions of space and time.


Each volume features an extensive number of photographs and is accompanied by a compact disc of Kubik’s own recordings. Erudite and exhaustive, Theory of African Music will be an invaluable reference for years to come.
AUTHOR BIOGRAPHY
Gerhard Kubik is professor of ethnology and African studies at the Universities of Vienna and Klagenfurt, Austria, and the author of many books, including Africa and the Blues.
REVIEWS
“Gerhard Kubik’s scholarship is deep and vast, and this collection of his writing has no parallel. He stands alone among Africanists for many reasons, which are amply demonstrated in these volumes: the length of time in which he has been actively researching and writing about music, the vast geographic breadth of his work within Africa, his experience in both Anglophone and Francophone Africa, and his seamless understanding of and sympathy for both older genres and more recent guitar music.”— Eric Charry, Wesleyan University

“Theory of African Music is monumental and falls into the ‘must read’ category for (ethno)musicologists, most particularly Africanists. Beyond the enormous quantity of information, data, and analytical approaches, the overwhelming strength of these volumes is Kubik’s lateral savvy. His breadth of knowledge and depth of understanding is unequalled in African music scholarship. Kubik also leaves a legacy of fascinating yet unexplained ‘musical riddles’ to stimulate our curiosity (Vol. I, 15–19). How is it that the multipart singing of the Baule in The Ivory Coast employs the same tonal system of triads within an equiheptatonic scale as the Ngangela, Chokwe, and Luvale in Angola? How can one explain the almost identical xylophones and performance practices among the Makonde and Makua in northern Mozambique and the Baule and Kru in The Ivory Coast and Liberia? And why do almost all sub-Saharan Africans dance in counterclockwise processions? Kubik may have left these riddles to others, though we look forward to his future publications with anticipation.”
— Ethnomusicology