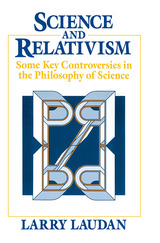 In recent years, many members of the intellectual community have embraced a radical relativism regarding knowledge in general and scientific knowledge in particular, holding that Kuhn, Quine, and Feyerabend have knocked the traditional picture of scientific knowledge into a cocked hat. Is philosophy of science, or mistaken impressions of it, responsible for the rise of relativism? In this book, Laudan offers a trenchant, wide-ranging critique of cognitive relativism and a thorough introduction to major issues in the philosophy of knowledge.
AUTHOR BIOGRAPHY
Larry Laudan is professor and chairman in the Department of Philosophy at the University of Hawaii. Among his books are Progress and Its Problems, Science, and Values, and Science and Hypothesis.
TABLE OF CONTENTS


Preface
Note to the Reader
1. Progress and Cumulativity
2. Theory-ladenness and Underdetermination
3. Holism
4. Standards of Success
5. Incommensurability
6. Interests and the Social Determinants of Belief
References
Index