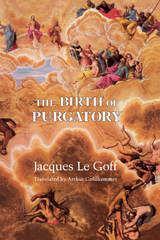 In The Birth of Purgatory, Jacques Le Goff, the brilliant medievalist and renowned Annales historian, is concerned not with theological discussion but with the growth of an idea, with the relation between belief and society, with mental structures, and with the historical role of the imagination. Le Goff argues that the doctrine of Purgatory did not appear in the Latin theology of the West before the late twelfth century, that the word purgatorium did not exist until then. He shows that the growth of a belief in an intermediate place between Heaven and Hell was closely bound up with profound changes in the social and intellectual reality of the Middle Ages. Throughout, Le Goff makes use of a wealth of archival material, much of which he has translated for the first time, inviting readers to examine evidence from the writings of great, obscure, or anonymous theologians.
AUTHOR BIOGRAPHY
Jacques Le Goff is the author of Time, Work, and Culture, also published by the University of Chicago Press.
TABLE OF CONTENTS


Acknowledgments
The Third Place
Part One - The Hereafter before Purgatory
1. Ancient Imaginings
2. The Fathers of Purgatory
3. The Early Middle Ages: Doctrinal Stagnation and the Riot of Imagination
Part Two - The Twelfth Century: The Birth of Purgatory The Century of the Great Advance
4. The Fire of Purgatory
5. "Locus Purgatorius": A Place for Purgation
6. Purgatory between Sicily and Ireland
7. The Logic of Purgatory
Part Three - The Triumph of Purgatory
8. The Scholastic Systematization
9. Social Victory: Purgatory and the Cure of Souls
10. The Poetic Triumph: The Divina Commedia
Why Purgatory?
Appendix 1. Bibliography of Purgatory
Appendix 2. "Purgatorium": The History of a Word
Appendix 3. Earliest Images
Appendix 4. Recent Works
Notes
Index