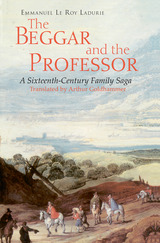 From a wealth of vivid autobiographical writings, Emmanuel Le Roy Ladurie reconstructs the extraordinary life of Thomas Platter and the lives of his sons. With masterful erudition, Le Roy Ladurie deepens and expands the historical contexts of these accounts and, in the process, brings to life the customs, perceptions, and character of an age poised at the threshold of modernity.

"Le Roy Ladurie paints a remarkably contemporary picture of life in the sixteenth century. . . . It's a good story, told with a deft narrative touch."—Michael S. Kimmel, The Nation

"Le Roy Ladurie is a master of the representative detail and uses the Platters' lives as a means to see a whole century 'through a glass, darkly'."—The Independent

"Le Roy Ladurie has not only thoroughly sketched out the Platters' particular brand of gusto, he has also made it seem a defining characteristic of the sixteenth century."—The New Republic

"All [of] the drama and pathos of a Disney film."—Emily Eakin, Lingua Franca
TABLE OF CONTENTS