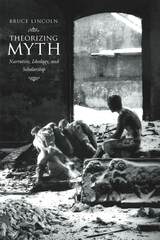 In Theorizing Myth, Bruce Lincoln traces the way scholars and others have used the category of "myth" to fetishize or deride certain kinds of stories, usually those told by others.

He begins by showing that mythos yielded to logos not as part of a (mythic) "Greek miracle," but as part of struggles over political, linguistic, and epistemological authority occasioned by expanded use of writing and the practice of Athenian democracy. Lincoln then turns his attention to the period when myth was recuperated as a privileged type of narrative, a process he locates in the political and cultural ferment of the eighteenth and nineteenth centuries. Here, he connects renewed enthusiasm for myth to the nexus of Romanticism, nationalism, and Aryan triumphalism, particularly the quest for a language and set of stories on which nation-states could be founded.

In the final section of this wide-ranging book, Lincoln advocates a fresh approach to the study of myth, providing varied case studies to support his view of myth—and scholarship on myth—as ideology in narrative form.
TABLE OF CONTENTS


Preface
I: Mythos among the Greeks
1. The Prehistory of Mythos and Logos
2. From Homer through Plato
II: A Modern History of Myth
3. The History of Myth from the Renaissance to the Second World War
4. Sir William's Myth of Origins
5. Nietzsche's "Blond Beast": A Genealogy
6. Dumezil's German War God
III: New Directions
7. From the Second World War to the Present (and Possibly a Little Beyond)
8. Plutarch's Sibyl
9. Gautrek's Saga and the Gift Fox
10. Once Again, the Bovine's Lament
11. The Pandits and Mr. Jones
Epilogue: Scholarship as Myth
Notes
Index