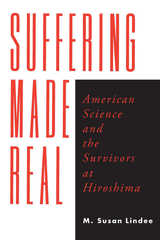 The atomic bombs dropped on Hiroshima and Nagasaki in August of 1945 unleashed a force as mysterious as it was deadly—radioactivity. In 1946, the United States government created the Atomic Bomb Casualty Commission (ABCC) to serve as a permanent agency in Japan with the official mission of studying the medical effects of radiation on the survivors. The next ten years saw the ABCC's most intensive research on the genetic effects of radiation, and up until 1974 the ABCC scientists published papers on the effects of radiation on aging, life span, fertility, and disease.

Suffering Made Real is the first comprehensive history of the ABCC's research on how radiation affected the survivors of the atomic bomb. Arguing that Cold War politics and cultural values fundamentally shaped the work of the ABCC, M. Susan Lindee tells the compelling story of a project that raised disturbing questions about the ethical implications of using human subjects in scientific research.
How did the politics of the emerging Cold War affect the scientists' biomedical research and findings? How did the ABCC document and publicly present the effects of radiation? Why did the ABCC refuse to provide medical treatment to the survivors? Through a detailed examination of ABCC policies, archival materials, the minutes of committee meetings, newspaper accounts, and interviews with ABCC scientists, Lindee explores how political and cultural interests were reflected in the day-to-day operations of this controversial research program.

Set against a period of conflicting views of nuclear weapons and nuclear power, Suffering Made Real follows the course of a politically charged research program and reveals in detail how politics and cultural values can shape the conduct, results, and uses of science.
TABLE OF CONTENTS


Acknowledgments
1: How the ABCC Began
1: The Most Important People Living
2: Colonial Science
3: Into the Field
4: The Genetics Study
2: Managing the ABCC
5: Midwives and Mothers
6: Political Survival in Washington
7: The No-Treatment Policy
8: The Public Meaning of the ABCC
3: Science and Context
9: What is a Mutation?
10: Draft Analysis, 1952-1953
11: Publication Strategies
12: The ABCC and the RERF
13: Conclusions
Bibliography
Index