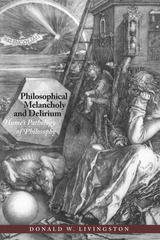 The Scottish philosopher David Hume is commonly understood as the original proponent of the "end of philosophy." In this powerful new study, Donald Livingston completely revises our understanding of Hume's thought through his investigation of Hume's distinction between "true" and "false" philosophy. For Hume, false philosophy leads either to melancholy over the groundlessness of common opinion or delirium over transcending it, while true philosophy leads to wisdom. Livingston traces this distinction through all of Hume's writings, providing a systematic pathology of the corrupt philosophical consciousness in history, politics, philosophy, and literature that characterized Hume's own time as well as ours.

By demonstrating how a philosophical method can be used to expose the political motivations behind intellectual positions, historical events, and their subsequent interpretations, Livingston revitalizes Hume's thought and reveals its relevance for contemporary dicussions of politics, nationalism, and ideology for the first time.