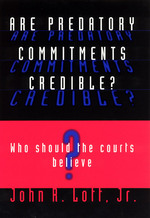 Are Predatory Commitments Credible?: Who Should the Courts Believe?
by John R. Lott, Jr.
University of Chicago Press, 1999
Cloth: 978-0-226-49355-8
Predatory pricing has long been a contentious issue among lawmakers and economists. Legal actions are continually brought against companies. But the question remains: how likely are firms to cut prices in order to drive rivals out of business? Predatory firms risk having to keep prices below cost for such an extended period that it would become cost-prohibitive. Recently, economists have turned to game theory to examine circumstances under which predatory tactics could be profitable.

John R. Lott, Jr. provides long-awaited empirical analysis in this book. By examining firms accused of or convicted of predation over a thirty-year period of time, he shows that these firms are not organized as the game-theoretic or other models of predation would predict. In contrast, what evidence exists for predation suggests that government enterprises are more of a threat.

Lott presents crucial new data and analysis, attacking an issue of major legal and economic importance. This impressive work will be of great interest to economists, legal scholars, and antitrust policy makers.


Preface
1. The Debate on Predation
2. Reputational Models of Predation: Testing the Assumptions
3. Nonprofit Objectives and Credible Commitments: What Does This Imply for Government Enterprises?
4. Are Government or Private Enterprises More Likely to Engage in Predatory Behavior? Some International Evidence
5. What Happens When the Victims Have Better Information Than the Predators?
6. Some Final Thoughts
Appendixes
A. Explaining the Framework Used to Evaluate the Legitimacy of Anti-dumping Cases
B. Data Appendix
C. Analyzing How the Profitability of Entry Deterrence Is Affected by the Possibility of Trading Profits
Notes
References
Index