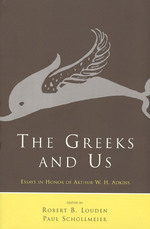 Arthur W. H. Adkins's writings have sparked debates among a wide range of scholars over the nature of ancient Greek ethics and its relevance to modern times. Demonstrating the breadth of his influence, the essays in this volume reveal how leading classicists, philosophers, legal theorists, and scholars of religion have incorporated Adkins's thought into their own diverse research.

The timely subjects addressed by the contributors include the relation between literature and moral understanding, moral and nonmoral values, and the contemporary meaning of ancient Greek ethics. The volume also includes an essay from the late Adkins himself illustrating his methodology in an analysis of the "Speech of Lysias" in Plato's Phaedrus.

The Greeks and Us will interest all those concerned with how ancient moral values do or do not differ from our own.