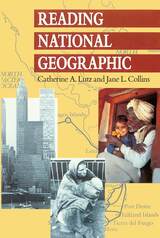 For its millions of readers, the National Geographic has long been a window to the world of exotic peoples and places. In this fascinating account of an American institution, Catherine A. Lutz and Jane L. Collins explore the possibility that the magazine, in purporting to teach us about distant cultures, actually tells us much more about our own.

Lutz and Collins take us inside the National Geographic Society to investigate how its photographers, editors, and designers select images and text to produce representations of Third World cultures. Through interviews with the editors, they describe the process as one of negotiating standards of "balance" and "objectivity," informational content and visual beauty. Then, in a close reading of some six hundred photographs, they examine issues of race, gender, privilege, progress, and modernity through an analysis of the way such things as color, pose, framing, and vantage point are used in representations of non-Western peoples. Finally, through extensive interviews with readers, the authors assess how the cultural narratives of the magazine are received and interpreted, and identify a tension between the desire to know about other peoples and their ways and the wish to validate middle-class American values.

The result is a complex portrait of an institution and its role in promoting a kind of conservative humanism that acknowledges universal values and celebrates diversity while it allows readers to relegate non-Western peoples to an earlier stage of progress. We see the magazine and the Society as a key middlebrow arbiter of taste, wealth, and power in America, and we get a telling glimpse into middle-class American culture and all the wishes, assumptions, and fears it brings to bear on our armchair explorations of the world.
TABLE OF CONTENTS


List of Illustrations
Preface
Acknowledgments
1. Comfortable Strangers: The Making of National Identity in Popular Photography
2. Becoming America's Lens on the World: National Geographic in the Twentieth Century
3. Inside the Great Machinery of Desire
4. A World Brightly Different: Photographic Conventions, 1950-1986
5. Fashions in the Ethnic Other
6. The Color of Sex: Postwar Photographic Histories of Race and Gender
7. The Photograph as an Intersection of Gazes
8. The Readers' Imagined Geographic: An Evolutionary Tale
9. The Pleasures and Possibilities of Reading
Epilogue
Appendix A: Photograph Codes
Appendix B: Photographs Discussed in Interviews
References
Index