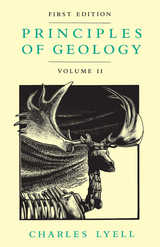 As important to modern world views as any work of Darwin, Marx, or Freud, Lyell's Principles of Geology has never before been available in paperback. In the second of three volumes, Lyell (1797-1875) continues his uniformitarian argument of Volume I—the physical features of the earth are endlessly fluctuating around a stable mean—but focuses on organic rather than inorganic processes. Volume II is widely known because of its influence on Darwin, who took the book on his famous Beagle voyage and was stimulated by Lyell's extensive treatment of biological history and diversity.
TABLE OF CONTENTS