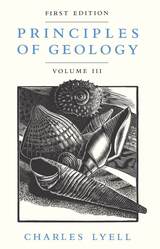 As important to modern world views as any work of Darwin, Marx, or Freud, Lyell's Principles of Geology has never before been available in paperback. In this third and final volume, Charles Lyell (1797-1875) devotes much attention to the "syntax of geology," that is, to a way of reconstructing the geological past on the basis of the "grammar" of the present processes he has described in the earlier volumes. He defines four periods of the Tertiary—Newer Pliocene, Older Pliocene, Miocene, and Eocene—and argues that the deposits dating from each period demonstrate the uniformity of processes and environments throughout the Tertiary, and indeed in earlier periods of earth history.

Martin J. S. Rudwick has compiled a bibliography giving full references for the sources Lyell cites in all three volumes of the Principles.