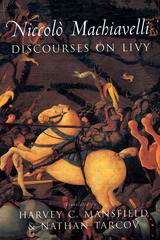 Discourses on Livy is the founding document of modern republicanism, and Harvey C. Mansfield and Nathan Tarcov have provided the definitive English translation of this classic work. Faithful to the original Italian text, properly attentive to Machiavelli's idiom and subtlety of thought, it is eminently readable. With a substantial introduction, extensive explanatory notes, a glossary of key words, and an annotated index, the Discourses reveals Machiavelli's radical vision of a new science of politics, a vision of "new modes and orders" that continue to shape the modern ethos.

"[Machiavelli] found in Livy the means to inspire scholars for five centuries. Within the Discourses, often hidden and sometimes unintended by their author, lie the seeds of modern political thought. . . . [Mansfield and Tarcov's] translation is careful and idiomatic."—Peter Stothard, The Times

"A model of contemporary scholarship and a brave effort at Machiavelli translation that allows the great Florentine to speak in his own voice."—Choice
TABLE OF CONTENTS