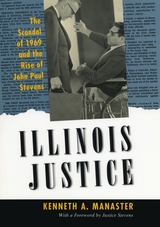 Illinois Justice: The Scandal of 1969 and the Rise of John Paul Stevens
by Kenneth A. Manaster
foreword by John Paul Stevens
University of Chicago Press, 2001
Cloth: 978-0-226-50243-4
Illinois political scandals reached new depths in the 1960s and ’70s. In Illinois Justice, Kenneth Manaster takes us behind the scenes of one of the most spectacular. The so-called Scandal of 1969 not only ended an Illinois Supreme Court justice’s aspirations to the US Supreme Court, but also marked the beginning of little-known lawyer John Paul Stevens’s rise to the high court.

In 1969, citizen gadfly Sherman Skolnick accused two Illinois Supreme Court justices of accepting valuable bank stock from an influential Chicago lawyer in exchange for deciding an important case in the lawyer’s favor. The resulting feverish media coverage prompted the state supreme court to appoint a special commission to investigate. Within six weeks and on a shoestring budget, the commission mobilized a small volunteer staff to reveal the facts. Stevens, then a relatively unknown Chicago lawyer, served as chief counsel. His work on this investigation would launch him into the public spotlight and onto the bench.

Manaster, who served on the commission, tells the real story of the investigation, detailing the dead ends, tactics, and triumphs. Manaster expertly traces Stevens’s masterful courtroom strategies and vividly portrays the high-profile personalities involved, as well as the subtleties of judicial corruption. A reflective foreword by Justice Stevens himself looks back at the case and how it influenced his career.

Now the subject of the documentary Unexpected Justice: The Rise of John Paul Stevens, Manaster’s book is both a fascinating chapter of political history and a revealing portrait of the early career of a Supreme Court justice.
AUTHOR BIOGRAPHY
Kenneth A. Manaster practiced law in Chicago from 1968 to 1972, including service as an Illinois Assistant Attorney General. He is professor of law and the Presidential Professor of Ethics and the Common Good at Santa Clara University.
REVIEWS
“An extraordinary, clear-headed and powerful book.”
— Baltimore Sun

“A masterful and sensitive analysis of the events of the summer of 1969 [that] will almost certainly be the final, authoritative word on the scandal and investigation that brought down two respected state supreme court justices and led John Paul Stevens to a seat on the nation’s high court.”
— Journal of Illinois History

“What could have been a depressing tale of tawdry wheeling and dealing among Chicago’s lawyers and judges is, in truth, an inspiring tale of how lawyers can make things right by upholding the highest standards of the profession.”
— California Lawyer

“If you enjoy reading about how law is practiced—by the very best when the stakes are high and the shot clock is about to run—this book has it.”
— American Lawyer


Foreword, by John Paul Stevens
Preface
Accusation: The First Half of June
1. A Citizen's Suspicions
2. Alarm Bells in the Newsrooms
3. Uproar in Springfield
4. A Special Commission
5. The Case Against Isaacs
Investigation: Mid-June to Mid-July
6. Stevens and His Team
7. Limiting the Questions
8. The Chief Justice's Stock
9. Starting the Search
10. Building the Answers
11. Blind Alleys and Roadblocks
Trial: The Second Half of July
12. The Trial Begins
13. Secrets in the Bank
14. Challenging Witnesses
15. A Justice's Deals
16. The Gift
17. Intermission and Jail
18. After the Landing
19. Alibis
20. Testing the Stories
21. Summing Up
22. Meeting the Deadline
Impact: August and Beyond
23. A Sad Affair
24. Loose Ends
25. Legacies and Echoes
26. Stevens to the Bench
27. Integrity of the Judgments
Notes
Sources
Acknowledgments
Index