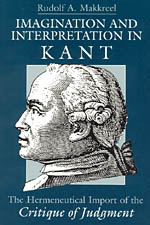 In this illuminating study of Kant's theory of imagination and its role in interpretation, Rudolf A. Makkreel argues against the commonly held notion that Kant's transcendental philosophy is incompatible with hermeneutics. The charge that Kant's foundational philosophy is inadequate to the task of interpretation can be rebutted, explains Makkreel, if we fully understand the role of imagination in his work. In identifying this role, Makkreel also reevaluates the relationship among Kant's discussions of the feeling of life, common sense, and the purposiveness of history.
TABLE OF CONTENTS