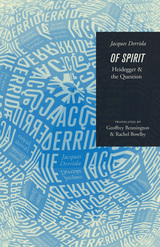 Of Spirit: Heidegger and the Question
by Jacques Derrida
translated by Geoffrey Bennington and Rachel Bowlby
University of Chicago Press, 1991
Paper: 978-0-226-50414-8
"I shall speak of ghost, of flame, and of ashes." These are the first words of Jacques Derrida's lecture on Heidegger. It is again a question of Nazism—of what remains to be thought through of Nazism in general and of Heidegger's Nazism in particular. It is also "politics of spirit" which at the time people thought—they still want to today—to oppose to the inhuman.