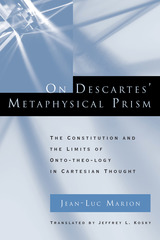 Does Descartes belong to metaphysics? What do we mean when we say "metaphysics"? These questions form the point of departure for Jean-Luc Marion's groundbreaking study of Cartesian thought. Analyses of Descartes' notion of the ego and his idea of God show that if Descartes represents the fullest example of metaphysics, he no less transgresses its limits. Writing as philosopher and historian of philosophy, Marion uses Heidegger's concept of metaphysics to interpret the Cartesian corpus—an interpretation strangely omitted from Heidegger's own history of philosophy. This interpretation complicates and deepens the Heideggerian concept of metaphysics, a concept that has dominated twentieth-century philosophy. Examinations of Descartes' predecessors (Aristotle, Augustine, Aquinas, and Suarez) and his successors (Leibniz, Spinoza, and Hegel) clarify the meaning of the Cartesian revolution in philosophy.

Expertly translated by Jeffrey Kosky, this work will appeal to historians of philosophy, students of religion, and anyone interested in the genealogy of contemporary thought and its contradictions.


Translator's Acknowledgments
Preface to the American Edition
Preface
Bibliographical Note
The Closure of a Question
I. Metaphysics
1. An Undetermined Question
2. Metaphysics as Transgression
3. Two Decisions in Favor of a First Philosophy
4. Primacy and Universality: The Order and Being [l'étant]
5. The First Other
II. Onto-theo-logy
6. Nothing Ontological
7. Principle and Causa Sui
8. The First Pronouncement about the Being of Beings: Cogitatio
9. The Second Pronouncement about the Being of Beings: Causa
10. Redoubled Onto-theo-logy
III. Ego
11. On the "Cogito, Sum" as a Primal Utterance
12. The Undetermined Equivalence of Being and Thought
13. The Egological Deduction of Substance
14. The Subsistent Temporality of the Ego
15. The Ego Outside Subsistence
IV. God
16. The Question of the Divine Names
17. Substance and Infinity
18. Power and Perfections
19. The System of Contradictions
20. The Exceptional Name
V. Overcoming
21. Pascal within Cartesian Metaphysics
22. Descartes Useless and Uncertain
23. The Distance between the Orders
24. The Ego Undone and the Decentering of the Self
25. The Destitution of Metaphysics
The Question of an Opening
English-Language Editions Cited
Index