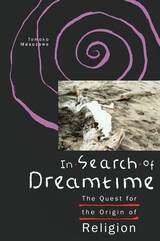 In this pioneering work of discourse analysis, Tomoko Masuzawa observes that the modern study of religion is peculiarly ambivalent toward the question of origin. Today's historians of religion maintain that they have abandoned speculative quests for the origin of religion; at the same time, they allege that concepts of absolute beginnings are fundamental to religion itself. By renouncing the desire for origins that they claim religious peoples embrace, historians can vicariously participate in the forbidden quest—so it seems—without forfeiting the authority accruing from their objectivist position.

This ambivalence of contemporary scholars echoes their ambivalence toward the ancestral "giants" of the discipline: Durkheim, Müller, and Freud. Masuzawa shows that the speculations of these three men on the origins of religion render the very notion of time and history problematic and contain powerful instruments for dislodging the position of "Western man" as the keeper of knowledge. Her critical rereading of these forefathers is framed by a compelling discussion of the postmodernist subversion of absolute origins in the works of Walter Benjamin and Rosalind Krauss and a comparison of Mircea Eliade and Nancy Munn's accounts of the Australian aboriginal "dreamtime." Engaging a number of critical issues within the burgeoning field of cultural studies, Masuzawa's book will have far-reaching implications not only for religious studies but throughout the human sciences.
AUTHOR BIOGRAPHY
Tomoko Masuzawa is associate professor of religious studies and member of the Program in Social Theory and Cross-Cultural Studies at the University of North Carolina, Chapel Hill.
TABLE OF CONTENTS