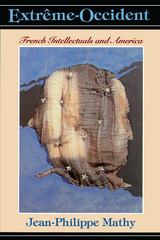 What does "America" mean to French intellectuals? Is it a postmodern ideal situated beyond history and metaphysics? A source of spiritual decadence that threatens the European tradition? Or is it "Extrême-Occident," the Far
Western site that gives historical reality to the utopias of the Renaissance and the Enlightenment?

Jean-Philippe Mathy offers the first systematic examination of French texts that address the question of America. He shows how prominent French intellectuals have represented America as myth and metaphor, covering the entire ideological spectrum from Maurras to Duhamel, and from Sartre to Aron. The texts themselves range from novels and poems to travel narratives and philosophical essays by Claudel, Sartre, de Beauvoir, Lyotard, Baudrillard, Kristeva, and many others.

Mathy deftly situates these discourses on America against the background of French intellectual and political history since 1789. The judgments on American culture that originate in France, he contends, are also statements about France itself. Widespread condemnation of American
materialism and pragmatism cuts across deep ideological and political divides in France, primarily because French intellectuals still operate within a framework of critical and aesthetic models born in the late Middle Ages and the Renaissance and elaborated in the age of French classicism.

Mathy engages issues central to interpreting the American experience, such as the current controversies over multiculturalism and Eurocentrism. Although Mathy deals mainly with French authors, he does not limit himself to them. Rather, he uses a comparative, cross-cultural approach that also takes in accounts of America by Nietzsche, Heidegger, Junger, Gramsci, and other Europeans, as well as American self-interpretations from Emerson and Dewey to Cornel West and Christopher Lasch.

Because debates on American modernity have played a crucial intellectual role in France, Extrême-Occident is a major contribution to modern French cultural
history. It will be essential reading for anyone wishing to understand the main currents of twentieth-century French thought.
TABLE OF CONTENTS


Acknowledgments
Introduction: The Rhetoric of "America"
1. The Contest of America: A Historical Perspective
2. American Dystopia
3. American Identity, American Difference: The Existentialists and the Objective Spirit of the United States
4. Culture in Soda Cans: The Cold War of the French Intellectuals
5. Poetics of Space: The Body of America
6. (Running) Out of History
Conclusion
Epilogue: Transatlantic Theories and the Continental Drift
Notes
Bibliography
Index