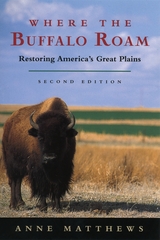 Where the Buffalo Roam: Restoring America's Great Plains
by Anne Matthews
University of Chicago Press, 2002
Paper: 978-0-226-51096-5
In 1987 Frank and Deborah Popper proposed a bold solution to the decline of America's Great Plains: create a vast nature preserve by returning 139,000 square miles in ten states to prairie and reintroducing the buffalo that once roamed there. In Where the Buffalo Roam, Anne Matthews follows the Poppers from Montana to Texas as they try to sell their idea called the Buffalo Commons; in the process, she introduces us to the people who love these arid windswept lands.

This edition includes a new foreword by environmental historian Donald Worster. Matthews's new afterword describes how with growing support from Native Americans and private groups like the Nature Conservancy, the Poppers' dream of a Buffalo Commons is becoming a reality.

"An admirably crafted book, as poignant and entertaining as it is informative."—Seattle Times

"Matthew's delightful account of the Poppers, their proposal and the controversy surrounding it does focus new attention on the region and its problems."—The Philadelphia Inquirer

"Bright, active, effective journalism. . . . An extremely savvy overlook of the dilemmas of the Great Plains."—Wallace Stegner

AUTHOR BIOGRAPHY
Anne Matthews is the author of Bright College Years: Inside the American Campus Today, published by the University of Chicago Press, and Wild Nights: Nature Returns to the City. Her family has lived on the Great Plains for seven generations.
TABLE OF CONTENTS