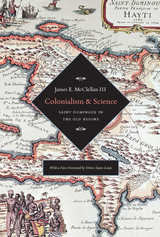 How was the character of science shaped by the colonial experience? In turn, how might we make sense of how science contributed to colonialism? Saint Domingue (now Haiti) was the world’s richest colony in the eighteenth century and home to an active society of science—one of only three in the world, at that time. In this deeply researched and pathbreaking study of the colony, James E. McClellan III first raised his incisive questions about the relationship between science and society that historians of the colonial experience are still grappling with today. Long considered rare, the book is now back in print in an English-language edition, accompanied by a new foreword by Vertus Saint-Louis, a native of Haiti and a widely-acknowledged expert on colonialism. Frequently cited as the crucial starting point in understanding the Haitian revolution, Colonialism and Science will be welcomed by students and scholars alike.

“By deftly weaving together imperialism and science in the story of French colonialism, [McClellan] . . . brings to light the history of an almost forgotten colony.”—Journal of Modern History

“McClellan has produced an impressive case study offering excellent surveys of Saint Domingue’s colonial history and its history of science.”—Isis

James E. McClellan IIIis professor of the history of science at Stevens Institute of Technology.He is the author of Science and Technology in World History, among several other books.

Introduction: The Case of Saint Domingue

Part 3. The Cercle des Philadelphes
11. Origins: Science or Freemasonry
12. Milestones on the Road to Recognition
13. On to Letters Patent
14. Profile of an Institution
15. The Fall of the Societe Royal of Cap Francois