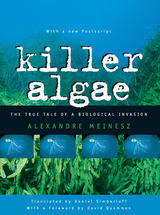 Two decades ago, a Stuttgart zoo imported a lush, bright green seaweed for its aquarium. Caulerpa taxifolia was captively bred by the zoo and exposed, for years, to chemicals and ultraviolet light. Eventually a sample of it found its way to the Oceanographic Museum in Monaco, then headed by Jacques Cousteau. Fifteen years ago, while cleaning its tanks, that museum dumped the pretty green plant into the Mediterranean.

This supposedly benign little plant—that no one thought could survive the waters of the Mediterranean—has now become a pernicious force. Caulerpa taxifolia now covers 10,000 acres of the coasts of France, Spain, Italy, and Croatia, and has devastated the Mediterranean ecosystem. And it continues to grow, unstoppable and toxic. When Alexandre Meinesz, a professor of biology at the University of Nice, discovered a square-yard patch of it in 1984, he warned biologists and oceanographers of the potential species invasion. His calls went unheeded. At that point, one person could have pulled the small patch out and ended the problem. Now, however, the plant has defeated the French Navy, thwarted scientific efforts to halt its rampage, and continues its destructive journey into the Adriatic Sea.

Killer Algae is the biological and political horror story of this invasion. For despite Meinesz's pleas to scientists and the French government, no agency was willing to take responsibility for the seaweed, and while the buck was passed, the killer algae grew. And through it all, the Oceanographic Museum in Monaco sought to exculpate itself. In short, Killer Algae—part detective story and part bureaucratic object lesson—is a classic case of a devastating ecological invasion and how not to deal with it.

"[U]tterly fascinating, not only because of the ecological battles [Meinesz] describes but also because of the wondrous natural phenomena involved."—Richard Bernstein, New York Times

"Akin to Rachel Carson's Silent Spring, Killer Algae shows the courage of a voice in the wilderness."—Choice

"A textbook case of how not to manage an environmental disaster."—Kirkus Reviews

"Meinesz's story is a frightening one, reading more like a science fiction thriller than a scientific account."—Publishers Weekly


AUTHOR BIOGRAPHY
Alexandre Meinesz is a professor of biology at the University of Nice and a member of various scientific committees on the environment.

Daniel Simberloff is the Nancy Gore Hunger Professor of Environmental Studies at the University of Tennessee, Knoxville.
TABLE OF CONTENTS


Foreword by David Quammen
Preface
Acknowledgments
Chapter One: From the Discovery of the Alga in Monaco to Its Arrival in France
Chapter Two: The Alga Grows ... and the Polemic Begins
Chapter Three: Caulerpa Taxifolia, Superstar
Chapter Four: The Stakeholders Squabble ... and the Alga Spreads
Chapter Five: Research Progresses ... and the Polemic Persists
Chapter Six: Chiaroscuro: 1997-1998
Chapter Seven: The Three Lessons of Caulerpa
Appendix One: The Biology of Caulerpa taxifolia as Known in 1991
Appendix Two: Chronology of a Heralded Invasion
Appendix Three: Table of Measures
Appendix Four: Acronyms of Organizations
Appendix Five: Diagram of the French Government
Notes
Index