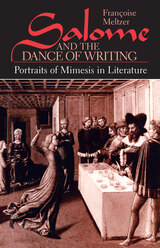 How does literature imagine its own powers of representation? Françoise Meltzer attempts to answer this question by looking at how the portrait—the painted portrait, framed—appears in various literary texts. Alien to the verbal system of the text yet mimetic of the gesture of writing, the textual portrait becomes a telling measure of literature's views on itself, on the politics of representation, and on the power of writing.

Meltzer's readings of textual portraits—in the Gospel writers and Huysmans, Virgil and Stendhal, the Old Testament and Apuleius, Hawthorne and Poe, Kafka and Rousseau, Walter Scott and Mme de Lafayette—reveal an interplay of control and subversion: writing attempts to veil the visual and to erase the sensual in favor of "meaning," while portraiture, with its claims to bringing the natural object to "life," resists and eludes such control. Meltzer shows how this tension is indicative of a politics of repression and subversion intrinsic to the very act of representation. Throughout, she raises and illuminates fascinating issues: about the relation of flattery to caricature, the nature of the uncanny, the relation of representation to memory and history, the narcissistic character of representation, and the interdependency of representation and power.

Writing, thinking, speaking, dreaming, acting—the extent to which these are all controlled by representation must, Meltzer concludes, become "consciously unconscious." In the textual portrait, she locates the moment when this essential process is both revealed and repressed.

AUTHOR BIOGRAPHY
Françoise Meltzer is associate professor of French and comparative literature at the University of Chicago.


Acknowledgments
Introduction
1. Salome and the Dance of Writing
2. The Spearpoint of Troilus
3. The Golden Calf and the Golden Ass
4. Still Life
5. Sleight of Hand
Handling
A Manifesto
The Doubts of Laocoön
Showing the Hand: Caricatures; or, It's Done with Mirrors
Echoes
Index