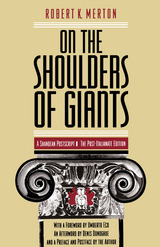 On the Shoulders of Giants: The Post-Italianate Edition
by Robert K. Merton
University of Chicago Press, 1993
Paper: 978-0-226-52086-5
With playfulness and a large dose of wit, Robert Merton traces the origin of Newton's aphorism, "If I have seen farther, it is by standing on the shoulders of giants." Using as a model the discursive and digressive style of Sterne's Tristram Shandy, Merton presents a whimsical yet scholarly work which deals with the questions of creativity, tradition, plagiarism, the transmission of knowledge, and the concept of progress.

"This book is the delightful apotheosis of donmanship: Merton parodies scholarliness while being faultlessly scholarly; he scourges pedantry while brandishing his own abstruse learning on every page. The most recondite and obscure scholarly squabbles are transmuted into the material of comedy as the ostensible subject is shouldered to one side by yet another hobby horse from Merton's densely populated stable. He has created a jeu d'esprit which is profoundly suggestive both in detail and as a whole."—Sean French, Times Literary Supplement
AUTHOR BIOGRAPHY
Robert K. Merton is University Professor Emeritus at Columbia University, Foundation Scholar of the Russell Sage Foundation, and a MacArthur Prize Fellow. A member of the National Academy of Sciences, he has received numerous honors and prizes for his work in both science and the humanities. His many books include the classic Social Theory and Social Structure, the Sociology of Science, Sociological Ambivalence, and Science, Technology, and Society in Seventeenth-Century England.
TABLE OF CONTENTS