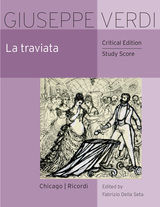 “I complain bitterly of the editions of my last operas, made with such little care, and filled with an infinite number of errors.”—Giuseppe Verdi

The University of Chicago Press, in collaboration with Casa Ricordi, has undertaken to publish the first critical edition of the complete works of Giuseppe Verdi. The series, based exclusively on original sources, is the only one to present authentic versions of all of the composer’s works; together with his operas, the critical edition presents his songs, his choral music and sacred pieces, and his string quartet and other instrumental works.
The Works of Giuseppe Verdi will be an invaluable standard reference work—a necessary acquisition for all music libraries and a joy to own for all lovers of opera. The new series of study scores presents an adaptation of each critical edition that provides scholars with an affordable and portable option for exploring Verdi’s oeuvre. The study scores have been designed to distinguish editors’ marks from Verdi’s own notations while remaining clear enough for use in performance. The introduction to each score discusses the work’s sources, composition, and performance history, as well as performance practices, instrumentation, and problems of notation. The newest editions of the study scores examine two of Verdi’s three-act operas: La traviata and Rigoletto.
AUTHOR BIOGRAPHY
Giuseppe Verdi (1813-1901) was one of the most influential composers of the nineteenth century and his operatic works are mainstays of the repertoire. The Works of Giuseppe Verdi, published by the University of Chicago Press, will include all twenty-eight operas as well as Verdi's sacred music, songs, chamber music, and juvenilia.
TABLE OF CONTENTS