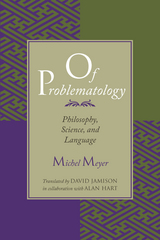 For Meyer, philosophy does not solve problems or give answers but instead shows how propositions are related to a whole field of questions that give them meaning. Reason is identified not with answers but with the question-answer process. Meyer pursues this new theory of reason and meaning in a critique of Western philosophy from Socrates, Plato, and Aristotle through Heidegger, Wittgenstein, and Foucault. He provides a detailed analysis of Descartes' notion of radical doubt and demonstrates its implications for the subsequent philosophical tradition that ignored the questioning process while pursuing an unshakable foundation for knowledge. Meyer argues that recent work in rhetoric points toward a theory of radical questioning and claims that the methods of rhetoric and argumentation must be turned back on philosophy itself in order to recover the original significance of metaphysics as the science of ultimate questions.
TABLE OF CONTENTS


Preface
Introduction: The Nature of Philosophy
1: What is a Philosophical Problem?
2: Dialectic and Questioning
3: From Propositional Rationality to Interrogative Rationality
4: Meditations on the Logos
5: From Theory to Practice: Argumentation and the Problematological Conception of Language
6: Toward a Concept of Meaning: From the Literal to the Literary
7: On Scientific Knowledge
Conclusion: Can Metaphysics Survive?
Index