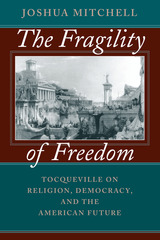 In this fresh interpretation of Tocqueville's thought, Joshua Mitchell explores the dynamic interplay between religion and politics in American democracy.

"An intelligent and sharply drawn portrait of a conservative Toqueville."—Anne C. Rose, Journal of American History

"I recommend this book as one of a very few to approach seriously the sources of Tocqueville's intellectual and moral greatness."—Peter Augustine Lawler, Journal of Politics

"Learned and thought-provoking."—Peter Berkowitz, New Republic
AUTHOR BIOGRAPHY
Joshua Mitchell is associate professor of government at Georgetown University. He is the author of Not by Reason Alone: Religion, History, and Identity in Early Modern Political Thought, also available from the University of Chicago Press.
TABLE OF CONTENTS


Preface
Chapter One
Introduction
1. The Augustinian Self
2. Antidotes to the Irrationalities of the Augustinian Self
3. Of the Embodiment and Disembodiment of Thought
4. Circularity of Cause and Effect
5. Of the Spillover Effects of One Sphere upon Another
6. Of Motion and Boundaries
7. Of New Beginnings and American Exceptionalism
Chapter Two
The Augustinian Self
1. Augustine and the Errancy from God
2. Hobbes and the Problem of Pride
3. Rousseau and the Errancy from Nature
4. Tocqueville and the Democratic Soul
5. The Enduring Power of the Augustinian Self: Nietzsche and the Democratic Age
Chapter Three
The Politics of Competition
1. The Purpose of Politics
2. Of Scale and Participation
3. The Interrelation of Political and Economic Participation
4. Of Associations
5. Of Newspapers: The Solution to the Problem of Site and Authority
6. Of Moderation and Motion: Mother Nature and Father Industriousness
7. When Boundaries Are Transgressed
8. Of Empire
Chapter Four
Christianity and Democracy
1. The Progress of History and Its Arrests: The Depth of Identity
2. The Problem of Difference in a Democracy
3. Christianity as Palliative for Envy and Difference
4. The Indirect Effects of Christianity upon Democracy
5. Of Long-Term Goals
6. The Right Relationship between Politics and Religion
7. The Permanence of Religion
Chapter Five
Conclusion
1. The New Political Science
2. Asking Too Much of Government, Asking Too Much of "the World"
3. What Is to Be Done?
4. Concluding Remarks
Bibliography