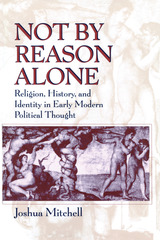 Masterfully interweaving political, religious, and historical themes, Not by Reason Alone creates a new interpretation of early modern political thought. Where most accounts assume that modern thought followed a decisive break with Christianity, Joshua Mitchell reveals that the line between the age of faith and that of reason is not quite so clear. Instead, he shows that the ideas of Luther, Hobbes, Locke, and Rousseau draw on history, rather than reason alone, for a sense of political authority.

This erudite and ambitious work crosses disciplinary boundaries to expose unsuspected connections between political theory, religion, and history. In doing so, it offers a view of modern political thought undistorted by conventional distinctions between the ancient and the modern, and between the religious and the political.

"Original. . . . A delight to read a political philosopher who takes the theologies of Hobbes and Locke seriously." —J. M. Porter, Canadian Journal of History