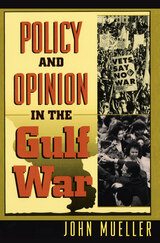 The Persian Gulf crisis may well have been the most extensively polled episode in U.S. history as President Bush, his opponents, and even Saddam Hussein appealed to, and tried to influence, public opinion. As well documented as this phenomenon was, it remains largely unexplained. John Mueller provides an account of the complex relationship between American policy and public opinion during the Gulf crisis.

Mueller analyzes key issues: the actual shallowness of public support for war; the effect of public opinion on the media (rather than the other way around); the use and misuse of polls by policy makers; the American popular focus on Hussein's ouster as a central purpose of the War; and the War's short-lived impact on voting. Of particular interest is Mueller's conclusion that Bush succeeded in leading the country to war by increasingly convincing the public that it was inevitable, rather than right or wise.

Throughout, Mueller, author of War, Presidents, and Public Opinion, an analysis of public opinion during the Korean and Vietnam wars, places this analysis of the Gulf crisis in a broad political and military context, making comparisons to wars in Panama, Vietnam, Korea, and the Falklands, as well as to World War II and even the War of 1812. The book also collects nearly 300 tables charting public opinion through the Gulf crisis, making Policy and Opinion in the Gulf War an essential reference for anyone interested in recent American politics, foreign policy, public opinion, and survey research.
TABLE OF CONTENTS


List of Figures
Preface
Ch. 1: A Perspective on Public Opinion
Ch. 2: The Approach to War: Data
Ch. 3: The Approach to War: Conclusions and Comparisons
Ch. 4: War
Ch. 5: The War's Aftermath
Ch. 6: Electoral Consequences of the War
Ch. 7: Policy and Opinion in the Gulf War
Ch. 8: The War in Retrospect: Policy Debates
Ch. 9: The Decline of the War as a Memorable Event
List of Tables
Note on Conventions Used in Tables
The Tables
Notes
References
Name Index
Subject Index
Figures