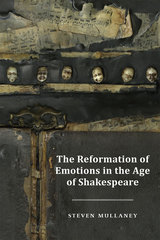 As Steven Mullaney shows in The Reformation of Emotions in the Age of Shakespeare, Elizabethan popular drama played a significant role in confronting the uncertainties and unresolved traumas of Elizabethan Protestant England. Shakespeare and his contemporaries—audiences as well as playwrights—reshaped popular drama into a new form of embodied social, critical, and affective thought. Examining a variety of works, from revenge plays to Shakespeare’s first history tetralogy and beyond, Mullaney explores how post-Reformation drama not only exposed these faultlines of society on stage but also provoked playgoers in the audience to acknowledge their shared differences. He demonstrates that our most lasting works of culture remain powerful largely because of their deep roots in the emotional landscape of their times.
AUTHOR BIOGRAPHY
Steven Mullaney is professor of English at the University of Michigan. He is also the author of The Place of the Stage: License, Play, and Power in Renaissance England.
REVIEWS
“A powerful and provocative meditation on the innovative cultural forms and emotional processes that emerged from the violent affective dislocations of memory, identity, and community of the English Reformation. Mullaney addresses issues of wide interest among scholars of early modern literature and culture through evocative readings of both familiar and unfamiliar plays that are consistently surprising, insightful, and original.”
— William N. West, Northwestern University

“The Reformation of Emotions in the Age of Shakespeare is an important book by an important critic. Mullaney gives historical depth to the affective turn in early modern studies, linking Reformation texts to the emotions they generated. What he has to say is always subtle, revelatory, and rhetorically brilliant.”
— Jean E. Howard, Columbia University

“This is a radiantly intelligent study. The Reformation of Emotions in the Age of Shakespeare will enlighten those interested in Shakespeare and will also reward the efforts of anyone seeking a deeper understanding of the social dimensions of the theatrical art in any age.”
— Paul Yachnin, McGill University

“Armed with an impassioned insight into the importance and meanings of our shared experience, and an inspired vision of the unique role of theatre as an art form, Mullaney has once more made a groundbreaking contribution to the field of English Renaissance studies. The Reformation of Emotions in the Age of Shakespeare demonstrates how much the dramatic and cultural performances of the period mattered, and illustrates how much they can, in the right hands, advance our understanding of the impact of the Reformation on English life.”
— Sir Michael Boyd, artistic director of the Royal Shakespeare Company, 2002–2012

“The breadth and range of Mullaney’s canvas often produces nuanced, surprising, and compelling juxtapositions. . . . His study is important as yet another reminder of how deeply affective and thoughtful the space of Renaissance English theaters was. . . . His book is a must read for students of early modern theater.”
— Sixteenth Century Journal

“Lithe and energetic. . . . A constantly stimulating and engaging read. . . . One of the great pleasures of this book is its unpredictability, its shifting points of reference, and its frequently wonderful turns of phrase.”
— Shakespeare

“Highly original and eloquently argued. . . . The great value of Mullaney’s . . . intelligent and thought-provoking contribution is that . . . it directs our attention to how drama functioned in post-Reformation England where the theater of state was constantly re-scripted and its roles redefined.”
— Spenser Review

“An innovative and compelling contribution to Elizabethan dramatic interpretation, theatre theory, and cultural critique. . . . Mullaney’s book offers a powerful account of an Elizabethan amphitheatre technology that institutionalized the production of private perspectives in public.”
— Renaissance and Reformation

“This is a beautifully written book. Mullaney’s prose is deft and detailed, and his careful scholarship leaves his study peppered with insights into the crumbling certainties of early modern life.”
— Times Literary Supplement

"A slim but powerful volume. . .bringing a provocatively original approach to a seemingly well-worn topic, The Reformation of Emotions is a remarkable attempt to engage sensibly. . . .Mullaney's creatively emblematic approach should serve to jostle critics out of their own well-worn argumentative positions, with the hope of inspiring new and methodologically original work on the theatre."
— Theatre Journal

Introduction Structures of Feeling and the Reformation of Emotions

1 Affective Irony in The Spanish Tragedy, Titus Andronicus, and The Merchant of Venice
2 The Wreckage of History: Memory and Forgetting in Shakespeare’s First History Tetralogy
3 What’s Hamlet to Habermas? Theatrical Publication and the Early Modern Stage