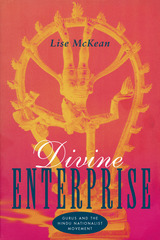 Through shrewd marketing and publicity, Hindu spiritual leaders can play powerful roles in contemporary India as businessmen and government officials. Focusing on the organizations and activities of Hindu ascetics and gurus, Lise McKean explores the complex interrelations among religion, the political economy of India, and global capitalism.

In this close look at the business of religion, McKean traces the ideological and organizational antecedents to the Hindu nationalist movement. The Indian state's increasing patronage of Hindu institutions makes competition for its support greater than ever. Using materials from guru's publications, the press, and extensive field research, McKean examines how participation by upper-caste ruling class groups in the Divine Life Society and other Hindu organizations further legitimates their own authority.

With a remarkable selection of photographs and advertisements showing icons of spirituality used to sell commodities from textiles to cement to comic books, McKean illustrates the pervasive presence of Hindu imagery in India's burgeoning market economy. She shows how gurus popularize Hindu nationalism through imagery such as the goddess, Mother India, and her martyred sons and daughters.
TABLE OF CONTENTS