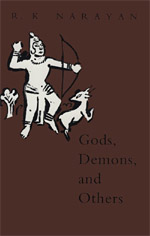 Gods, Demons, and Others
by R. K. Narayan
illustrated by R. K. Laxman
University of Chicago Press, 1993
Paper: 978-0-226-56825-6
Following in the footsteps of the storytellers of his native India, R. K. Narayan has produced his own versions of tales taken from the Ramayana and the Mahabarata. Carefully selecting those stories which include the strongest characters, and omitting the theological or social commentary that would have drawn out the telling, Narayan informs these fascinating myths with his urbane humor and graceful style.

"Mr. Narayan gives vitality and an original viewpoint to the most ancient of legends, lacing them with his own blend of satire, pertinent explanation and thoughtful commentary."—Santha Rama Rau, New York Times