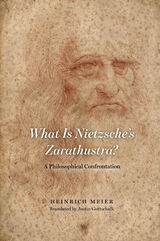 Thus Spoke Zarathustra is Nietzsche’s most famous and most puzzling work, one in which he makes the greatest use of poetry to explore the questions posed by philosophy. But in order to understand the movement of this drama, we must first understand the character of its protagonist: we must ask, What Is Nietzsche’s Zarathustra?

Heinrich Meier attempts to penetrate the core of the drama, following as a guiding thread the question of whether Zarathustra is a philosopher or a prophet, or, if he is meant to be both, whether Zarathustra is able to unite philosopher and prophet in himself. Via a close reading that uncovers the book’s hidden structure, Meier develops a highly stimulating and original interpretation of this much discussed but still ill-understood masterwork of German poetic prose. In the process, he carefully overturns long-established canons in the academic discourse of Nietzsche-interpretation. The result is a fresh and surprising grasp of Nietzsche’s well-known teachings of the overman, the will to power, and the eternal return.
AUTHOR BIOGRAPHY
Heinrich Meier is director of the Carl Friedrich von Siemens Foundation in Munich, professor of philosophy at the University of Munich, and permanent visiting professor in the John U. Nef Committee on Social Thought at the University of Chicago. He is the author of nine books, including On the Happiness of the Philosophic Life and Political Philosophy and the Challenge of Revealed Religion. Justin Gottschalk holds a PhD from the University of California, San Diego.
TABLE OF CONTENTS

What Is Nietzsche’s Zarathustra?