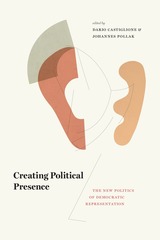 In Creating Political Presence, a diverse and international group of scholars explores the implications of such a turn. Two broad, overlapping perspectives emerge. In the first section, the contributions investigate how political representation relates to empowerment, either facilitating or interfering with the capacity of citizens to develop autonomous judgment in collective decision making. Contributions in the second section look at representation from the perspective of inclusion, focusing on how representative relationships and claims articulate the demands of those who are excluded or have no voice. The final section examines political representation from a more systemic perspective, exploring its broader environmental conditions and the way it acquires democratic legitimacy.
AUTHOR BIOGRAPHY
Dario Castiglione is the Director of the Centre for Political Thought at the University of Exeter and coeditor of Institutional Diversity in Self-Governing Societies. Johannes Pollak is the rector and professor of political science at Webster Vienna Private University and a senior researcher at the Institute for Advanced Studies in Vienna.
TABLE OF CONTENTS

Chapter 1. The Logics of Democratic Presence in Representation
Dario Castiglione and Johannes Pollak

Part I. Representation as Democratic Empowerment

Chapter 3. Judgment Alone: Cloven Citizenship in the Era of the Internet
Nadia Urbinati

Chapter 5. Populist Twist: The Relationship between the Leader and the People in Populism
Paula Diehl

Chapter 8. Who Counts as a Democratic Representative? On Claims of Self-Appointed Representation
Laura Montanaro

Chapter 11. Externalities and Representation beyond the State: Lessons from the European Union
Christopher Lord