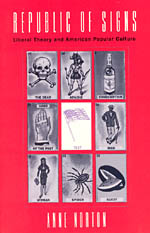 Norton examines the enactment of liberal ideas in popular culture; in the possessions of ordinary people and the habits of everyday life. She sees liberalism as the common sense of the American people: a set of conventions unconsciously adhered to, a set of principles silently taken for granted.

The author ranges over a wide expanse of popular activities (e.g. wrestling, roller derby, lotteries, shopping sprees, and dining out), as well as conventional political topics (e.g., the Constitution, presidency, news media, and centrality of law). Yet the argument is pointed and probling, never shallow or superficial. Fred and Wilma Flintstone are as vital to the republic as Franklin and Eleanor Roosevelt.

"In discussions that range from the Constitution and the presidency to money and shopping, voting, lotteries, and survey research, Norton discerns and imaginatively invents possibilities that exceed recognized actualities and already approved opportunities."—Richard E. Flathman, American Political Science Review

"[S]timulating and stylish exploration of political theory, language, culture, and shopping at the mall . . . popular culture at its best, informed by history and theory, serious in purpose, yet witty and modest in tone."—Bernard Mergen, American Studies International
TABLE OF CONTENTS


Acknowledgments
Introduction
1: Republic of Signs
2: Culture of Consumption
3: The President as Sign
4: Our Homeland the Text
5: Before the Law
6: Representation and the Silences of Politics
Afterword: Democratic Excesses
Notes
Index