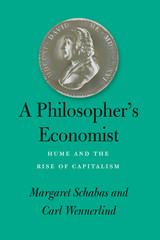 Although David Hume’s contributions to philosophy are firmly established, his economics has been largely overlooked. A Philosopher’s Economist offers the definitive account of Hume’s “worldly philosophy” and argues that economics was a central preoccupation of his life and work. Margaret Schabas and Carl Wennerlind show that Hume made important contributions to the science of economics, notably on money, trade, and public finance.  Hume’s astute understanding of human behavior provided an important foundation for his economics and proved essential to his analysis of the ethical and political dimensions of capitalism. Hume also linked his economic theory with policy recommendations and sought to influence people in power. While in favor of the modern commercial world, believing that it had and would continue to raise standards of living, promote peaceful relations, and foster moral refinement, Hume was not an unqualified enthusiast. He recognized many of the underlying injustices of capitalism, its tendencies to promote avarice and inequality, as well as its potential for political instability and absolutism.

Hume’s imprint on modern economics is profound and far reaching, whether through his close friend Adam Smith or later admirers such as John Maynard Keynes and Friedrich Hayek. Schabas and Wennerlind’s book compels us to reconsider the centrality and legacy of Hume’s economic thought—for both his time and ours—and thus serves as an important springboard for reflections on the philosophical underpinnings of economics.
AUTHOR BIOGRAPHY
Margaret Schabas is professor of philosophy at the University of British Columbia and the author of A World Ruled by Number and The Natural Origins of Economics. Carl Wennerlind is professor of history at Barnard College and the author of Casualties of Credit. He coedited David Hume's Political Economy with Margaret Schabas.

REVIEWS
“There is at last a comprehensive study of David Hume’s economic writings and his economic life and times. A Philosopher’s Economist is illuminating, surprising, and a pleasure to read.”
— Emma Rothschild, Harvard University

“In this engaging and thought-provoking book, Schabas and Wennerlind demonstrate both that David Hume was one of the most important early theorists of capitalism and that economics ‘serves as a unifying thread’ in the philosopher’s life work. This book is essential reading for those interested in the history of capitalism, the Enlightenment, and the age of revolutions. It is also vital to understanding the underpinnings of modern economic debates.”
— Steven Pincus, University of Chicago

Introduction
Chapter 1. “A Rising Reputation”: Hume’s Lifelong Pursuit of Economics
Chapter 2. “A Cautious Observation of Human Life”: Hume on the Science of Economics
Chapter 3. “A More Virtuous Age”: Hume on Property and Commerce
Chapter 4. “That Indissoluble Chain of Industry, Knowledge, and Humanity”: Hume on Economic and Moral Improvement
Chapter 5. “Little Yellow or White Pieces”: Hume on Money and Banking
Chapter 6. “A Prayer for France”: Hume on International Trade and Public Finance
Chapter 7. “Our Most Excellent Friend”: Hume’s Imprint on Economics