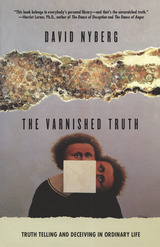 Everyone says that lying is wrong. But when we say that lying is bad and hurtful and that we would never intentionally tell a lie, are we really deceiving anyone? In this wise and insightful book, David Nyberg exposes the tacit truth underneath our collective pretense and reveals that an occasional lie can be helpful, healthy, creative, and, in some situations, even downright moral.

The Varnished Truth takes us beyond philosophical speculation and clinical analysis to give us a sense of what it really means to tell the truth. As Nyberg lays out the complexities involved in leading a morally decent life, he compels us to see the spectrum of alternatives to telling the truth and telling a clear-cut lie.
TABLE OF CONTENTS


Acknowledgments
Introduction
1: Truth Telling Is Morally Overrated
Pt. 1: What It Means to "Tell the Truth"
2: Varieties of Truth
3: The Reverse of Truth Has a Hundred Thousand Shapes
4: Showing and Hiding: The Logic of Deception
5: Self-Deception: Weakness or Wisdom?
Pt. 2: What Deception Is For
6: Civility: Revealing and Concealing Our Thoughts
7: Friendship and Altruism: Be Untruthful to Others As You Would Have Others Be Untruthful to You
8: Raising Children: The Right Truth at the Right Time
9: Truth, Verdicts, and Justice
Pt. 3: Deception and Moral Decency
10: Inventing Right and Wrong
Conclusion
Selected Bibliography
Index