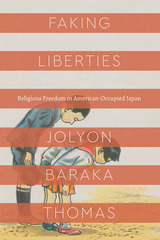 Religious freedom is a founding tenet of the United States, and it has frequently been used to justify policies towards other nations. Such was the case in 1945 when Americans occupied Japan following World War II. Though the Japanese constitution had guaranteed freedom of religion since 1889, the United States declared that protection faulty, and when the occupation ended in 1952, they claimed to have successfully replaced it with “real” religious freedom.

Through a fresh analysis of pre-war Japanese law, Jolyon Baraka Thomas demonstrates that the occupiers’ triumphant narrative obscured salient Japanese political debates about religious freedom. Indeed, Thomas reveals that American occupiers also vehemently disagreed about the topic. By reconstructing these vibrant debates, Faking Liberties unsettles any notion of American authorship and imposition of religious freedom. Instead, Thomas shows that, during the Occupation, a dialogue about freedom of religion ensued that constructed a new global set of political norms that continue to form policies today.
AUTHOR BIOGRAPHY
Jolyon Baraka Thomas is an assistant professor of religious studies at the University of Pennsylvania.
REVIEWS
“A powerful study of warring rhetoric on religious freedom within and between Japan and the United States, Thomas’s work presents a model analysis of debate on a foundational concept, minutely clarifying the stakeholders, the stakes, and the consequences of the argument. This book shows the Allied Occupation of Japan in an entirely new light and unprecedented detail through its examination of policy as hammered out by the occupiers and the occupied, on the basis of a rich heritage of thought in both countries on the meaning of religious freedom.”
— Helen Hardacre, Harvard University, author of Shinto and the State, 1868-1988

“Faking Liberties is a brilliant intervention in a burgeoning literature on the historical coercions of religious freedom. Thomas compares religious freedom regimes in Japan under pre-WWII Meiji rule and the postwar US occupation, exploding myths of Japanese exceptionalism (both negative and positive) and revealing how this freedom served in both cases as a project that defined and disciplined the limits of religion.”
— Tisa Wenger, Yale University, author of Religious Freedom: The Contested History of an American Idea

“Jolyon Thomas has written an original and enthralling account of the ideal of ‘religious freedom’ in the Allied Occupation of Japan. By tracing competing political, ecclesiastical, and academic discourses, Thomas shows that the ideal of religious freedom came to favor some groups at the expense of others and often resulted in the ossification of religious difference. The work is a timely and dazzling intervention with broad implications.”
— Jason Josephson-Storm, Williams College, author of The Invention of Religion in Japan

"Given that the last decade has seen a number of scholarly works detailing the establishment of 'religion' as a concept in early Meiji Japan, Thomas’s efforts to show how the category of religion was negotiated in Japan during the entire first half of the twentieth century represents a welcome move forward in time. Meticulously researched, theoretically sharp, and elegantly written, Faking Liberties is an excellent study not only of how religious freedom was constructed as a transnational ideal through mutual negotiation during the period of American occupation, but also of how various actors interacted with religious freedom during the interbellum period. Faking Liberties is a welcome addition to the field of Japanese religious studies as well as to the critical study of religion and law."
— H-Net Reviews

"Thomas draws on an impressive array of important sources to argue that although religious freedom solves problems of inequity and oppression, it creates new problems and is inherently coercive."
— Choice

"Faking Liberties is a challenging intervention into not only the historiography of modern Japan, but religious studies more generally."
— New Books Network

"Through archival prowess and intra-textual paradox, Thomas offers a well-timed reminder: to
stake out ground in the capacious is to take a partisan position. It is to recognize, again, the
ways that our critical projects remain enmeshed with hard-won visions of social good and with
so many ambivalent projects of humanism that—still, somehow—we cannot manage not to
want."
— Lucia Hulsether, Reading Religion

"Excellent . . . [the] connection to contemporary policy debates makes Faking Liberties an enormously valuable read beyond the scholarly world of Japanese studies. . . .  Faking Liberties is an engrossing and valuable read for anyone involved in, or simply interested in, the interaction of scholarship and policy at the intersection of religion and international affairs."
— Judd Birdsall, The Review of Faith & International Affairs

"By looking at the ways discourses about religious freedom regulated race, gender, and ritual practices in occupation-era Japan, we can see the double-standard of what America has advocated for abroad versus practiced at home. Thomas calls for deeper scholarly engagement with the category of 'freedom' and how freedom of religious expression has been racially coded as white in the United States. It is a cautionary tale with important pedagogical and institutional lessons. If we find that discussing 'diversity looks like activism,' he suggests, then 'we have a huge problem' that reveals why diversity in the academy is essential for discussing secularism, religious freedom, and religion today."
— Religious Studies Project

"Jolyon Thomas’s book serves as an astute religious history of the Us occupation of post-WWII Japan, and also provides a powerful corrective to misperceptions about religious freedom broadly and about prewar religious freedom in Japan specifically."
— Anne M. Blankenship, American Religion

"Faking Liberties, drawing richly from archival materials and prewar and wartime books and newspapers in both English and Japanese, is thus a major disruption of the received narrative about religion, and freedom, in Japan...a must-read for anyone who wants to learn more about religion and freedom in Japan or as 'universal' ideas."
— Jason Morgan, Journal of American-East Asian Relations

"This is a thoughtful, readable, well-researched and insightful book. Thomas not only describes the U.S. occupation, but also the preceding period in great detail. It will be especially helpful for religious studies scholars and students of church (religion) and state."
— Gwyn McClelland, Journal of Church and State

"Faking Liberties...sets new standards for methodological rigor in archival work on modern Japanese religions as it provides unprecedented access to key works by Buddhist and other religious figures, Japanese government officials, Occupation authorities, and numerous other contributors to discourse on religious freedom...Thomas’s attention to injustice animates an overdue destruction of long-standing myths about Japanese and American exceptionalism. The result is the most important book on Japanese religion of our scholarly generation. It rewrites Japanese religious history in a way that requires all of us to follow Thomas in calling out racialized mythologies maintained by the institutions we study. Like it or not, we are now in a post–Faking Liberties era."
— Levi McLaughlin, Journal of Asian Studies

"Faking Liberties is a critical and meticulous history of the use and evolution of discourses on religious freedom during the American Occupation of Japan. Thomas provides welcome rebuttals to the universalist premises of earlier historiography of this period through a careful investigation of religious freedom in Japan from the early Meiji period to 1952. Faking Liberties is a valuable contribution to a body of literature concerned with the “politics and ethics of who gets to define” religious freedom (5), and has broad significance for contemporary understandings of modern Japanese history."
— New Voices in Japanese Studies

Prologue: The Drums of War
Conventions
Introduction: The Universal Particularity of Religious Freedom

A Preoccupation with Religious Freedom

The Occupation of Religious Studies