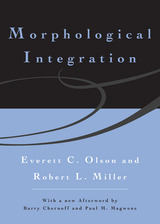 Morphological Integration
by Everett C. Olson and Robert L. Miller
University of Chicago Press, 1999
Paper: 978-0-226-62905-6
Despite recent advances in genetics, development, anatomy, systematics, and morphometrics, the synthesis of ideas and research agenda put forth in the classic Morphological Integration remains remarkably fresh, timely, and relevant. Pioneers in reexamining morphology, Everett Olson and Robert Miller were among the first to explore the concept of the integrated organism in both living and extinct populations. In a new foreword and afterword, biologists Barry Chernoff and Paul Magwene summarize the landmark achievements made by Olson and Miller and bring matters discussed in the book up to date, suggest new methods, and accentuate the importance of continued research in morphological integration.