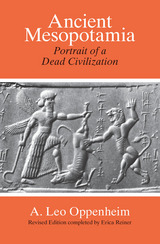 "This splendid work of scholarship . . . sums up with economy and power all that the written record so far deciphered has to tell about the ancient and complementary civilizations of Babylon and Assyria."—Edward B. Garside, New York Times Book Review

Ancient Mesopotamia—the area now called Iraq—has received less attention than ancient Egypt and other long-extinct and more spectacular civilizations. But numerous small clay tablets buried in the desert soil for thousands of years make it possible for us to know more about the people of ancient Mesopotamia than any other land in the early Near East.

Professor Oppenheim, who studied these tablets for more than thirty years, used his intimate knowledge of long-dead languages to put together a distinctively personal picture of the Mesopotamians of some three thousand years ago. Following Oppenheim's death, Erica Reiner used the author's outline to complete the revisions he had begun.

"To any serious student of Mesopotamian civilization, this is one of the most valuable books ever written."—Leonard Cottrell, Book Week

"Leo Oppenheim has made a bold, brave, pioneering attempt to present a synthesis of the vast mass of philological and archaeological data that have accumulated over the past hundred years in the field of Assyriological research."—Samuel Noah Kramer, Archaeology

A. Leo Oppenheim, one of the most distinguished Assyriologists of our time, was editor in charge of the Assyrian Dictionary of the Oriental Institute and John A. Wilson Professor of Oriental Studies at the University of Chicago.
TABLE OF CONTENTS


List of Illustrations
Acknowledgments
Preface to the Revised Edition
Prefatory Note
Introduction: Assyriology—Why and How?
I. The Making of Mesopotamia
The Background
The Setting
The Actors
The World Around
II. Go to, let us build a city and a tower!
The Social Texture
Economic Facts
"The Great Organizations"
The City
Urbanism
III. Regnum a gente in gentem transfertur
Historical Sources or Literature?
An Essay on Babylonian History
An Essay on Assyrian History
IV. Nah ist—und schwer zu fassen der Gott
Why a "Mesopotamian Religion" Should Not Be Written
The Care and Feeding of the Gods
Mesopotamian "Psychology"
The Arts of the Diviner
V. Laterculis coctilibus
The Meaning of Writing
The Scribes
The Creative Effort
Patterns in Non-Literary Texts
VI. There are many strange wonders, but nothing more wonderful than man
Medicine and Physicians
Mathematics and Astronomy
Craftsmen and Artists
Epilogue
Appendix: Mesopotamian Chronology of the Historical Period by J. A. Brinkman
Notes
Bibliographical Notes
Glossary of Names and Terms
Index